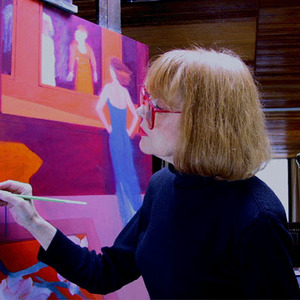 Recently Hatch’s work was selected for the Inaugural Exhibit at Western Michigan University’s Richmond Center, along with 2 artists from NYC & 1 from Chicago. Prior to this her painting White Lies won the Grand & Purchase Prize in the West Michigan Area Show, adding this work to the Permanent Collection of the Kalamazoo Institute of Arts.

Her work is included in over 300 Public and Private Collections in the US and Canada including The Michigan Commission on Arts in Public Places. She was a finalist in Michigan’s first Percent for Art Program for the new State Library/Museum/Archives Building. Her painting She Drops Her Glove and He is There received the Michigan Artists Competition Purchase Prize, and was added to the Michigan Collection. Two Michigan Council for the Arts Grants resulted in Invitational Exhibits for Grant Recipients and inclusion in “Artists in Michigan”, the Michigan Council for the Arts, 20th Anniversary Catalog. As well as winning two awards in the National Association of Women’s Annual Exhibits in NYC. Hatch has exhibited throughout the US with a focus on Michigan, Chicago &. NYC 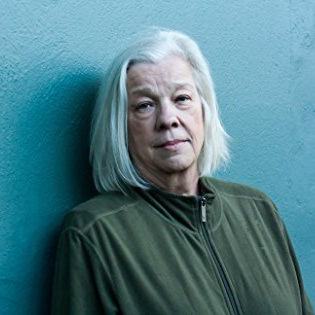 Elizabeth Kerlikowske is the author of  chapbooks of poetry (Postcards, Her Bodies, Last Hula, The Seven Suicide Notes, Rib, Chain of Lakes), a collection of children’s stories (Before the Rain), and a prose poem memoir of her father (The Shape of Dad). Her first full length book of poetry was from Mayapple Press (Dominant Hand.) Her work has also been featured in several recent anthologies including Nothing to Declare: a Guide to the Flash Sequence, Solace, The Shell Game,  and the Michigan writers anthology published by Western Michigan University.

She has won the Detroit Auto Dealers Short Story Contest twice, the So To Speak magazine poetry award in 2004, The Binnacle’s 2008 Ultra-short Fiction Grand Prize, and numerous other prizes. She has received fellowships to the Atlantic Center for the Arts twice,  Ragdale twice,  the Georgia Arts and Letters Conference. She has been publishing poetry and fiction in journals and magazines for over forty years as well as children’s stories in Guideposts for Kids (online) and New Moon, A Magazine for Girls.

Elizabeth completed her doctorate at Western Michigan University in 2007 and recently retired from Kellogg Community College. She is president of Friends of Poetry, an organization in Kalamazoo dedicated to the enjoyment of the reading and writing of poetry. The group runs the annual POEMS THAT ATE OUR EARS contest, sponsors a reading series, and painted poetry murals on downtown Kalamazoo walls. 9 murals are still intact. She is president of the Poetry Society of Michigan and was awarded a Community Medal for the Arts award in 2017 by the Arts Council of Kalamazoo. She also makes visual art that is either big, illuminated, or can be sat on.